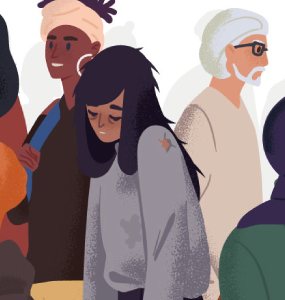 Do you benefit from slave labour? Unless you live entirely off the grid, the answer is an unfortunate ‘yes’. Across every industry and in every country in the world, criminals are forcing people to work under inhumane conditions while cutting off any means for them to get help, be rescued or even take action themselves to escape. This is called ‘modern slavery’.

It exists in all stages of the supply chain. Modern slaves may be picking raw materials, producing and manufacturing goods, and shipping and delivering them to you. They may be providing services – such as that long-awaited manicure, or giving your car a much-needed wash. Everything from your mobile phone, your trainers and the t-shirt on your back, to the coffee grains or tea bags that help get you through the day, could all be tainted by the fact that modern slaves were exploited to produce them.

Victims may have no way out – and some may not even realise they’re being exploited. It’s up to us to be aware of the signs of modern slavery so we can take action to help someone when they need it most. We all need to do our bit to stop this criminal industry in its tracks. We’ve outlined the ways you can help fight modern slavery below.

A short introduction to modern slavery

Modern slavery is defined as the exploitation of men, women and children for either personal or commercial gain. If someone is enslaved, it could mean they’re forced to work against their will, with limited freedom of movement, and may be ‘owned’ or controlled by the exploiter. They may also be dehumanised, sold as property or treated as a commodity rather than a person with rights. We cover the basics of modern slavery and trafficking in our article on the topic – including how to make a compensation claim if you’re a survivor of slavery, trafficking or exploitation.

Who are the victims of modern slavery?

Globally, 40 million people are estimated to be trapped in modern day slavery. More than half are in forced labour – working against their will under threat, intimidation or coercion. And, there’s no typical victim of slavery.

Men, women and children of all ages, nationalities and ethnicities may be enslaved, although criminals are more likely to target minority groups and groups that are socially excluded. Two-thirds of victims are women, and every fourth victim is a child. Criminals find their victims from over 130 countries, with the top five most common countries of origin being the UK, Albania, Vietnam and China. 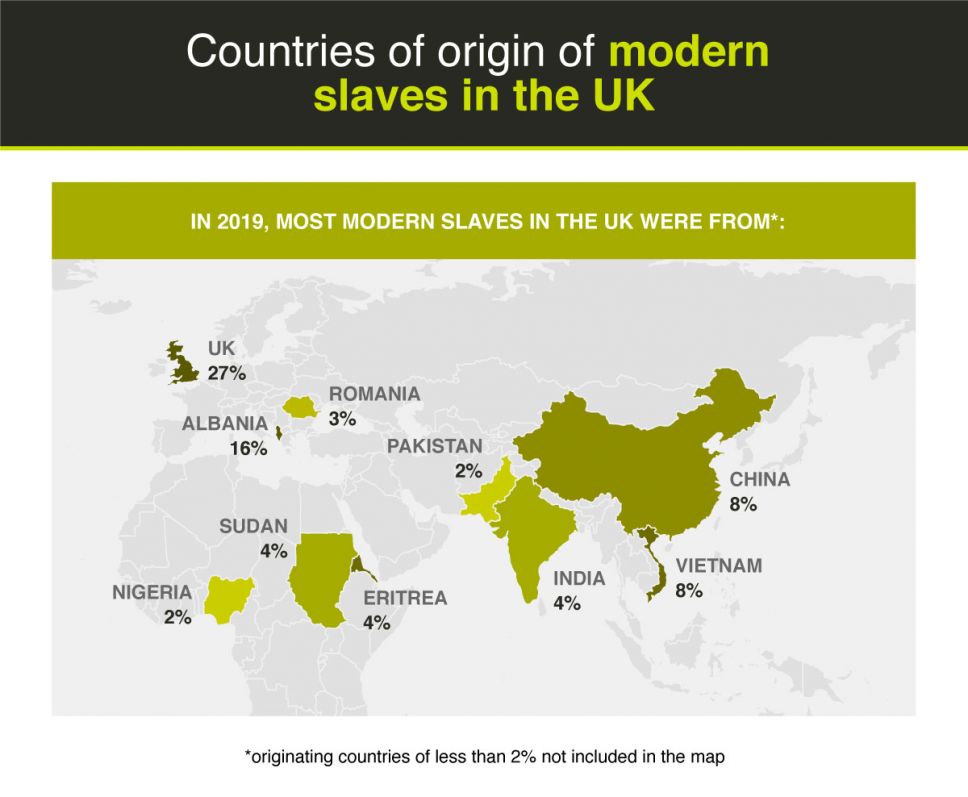 The UK government reported that there were 3,804 potential victims of trafficking identified in 2016. But these figures are only based on what’s being reported. The real number of modern slaves may be much more. The Centre for Social Justice used a data analytics tool to estimate that there could be at least 100,000 victims of modern slavery in the UK alone – far more than the 13,000 estimated by the UK government based on reported figures.

In the UK, the National Referral Mechanism (NRM) framework is used to identify victims of modern slavery and offer them the support they need. While cases reported to the NRM provide a useful snapshot of the demographics of modern slaves in the UK, there could be thousands of unidentified victims whose situations haven’t been reported. Similarly, some victims may choose not to be referred, or it might not be in their best interests to do so. 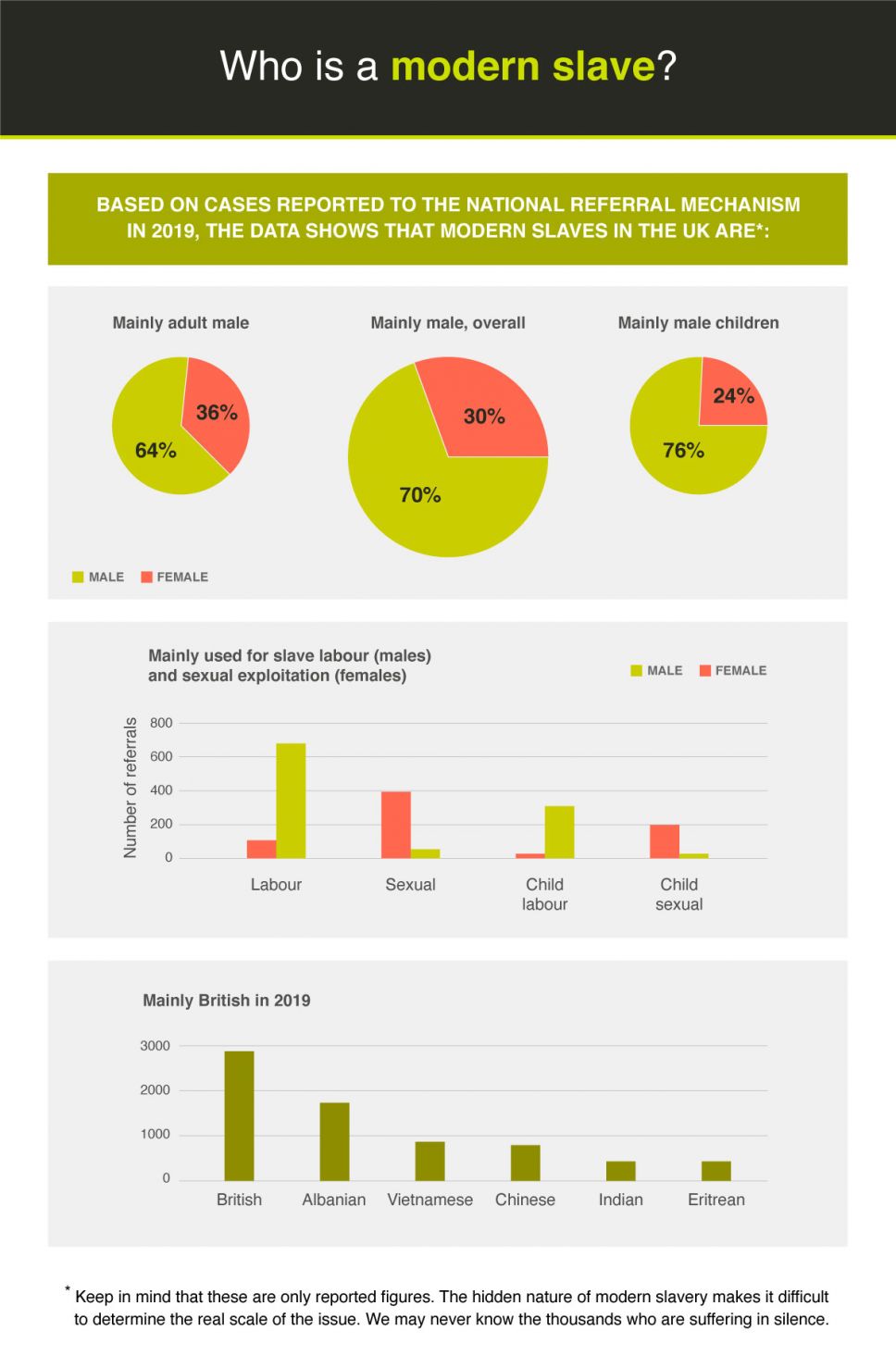 How do supply chains contribute to modern slavery?

One of the main ways that the general public might be contributing to modern slavery is through the supply chain. Most products pass through a chain of people who retrieve the raw materials, produce or manufacture the items and ship and deliver it to you. For example, almost 20% of the world’s global cotton production is linked to forced labour in China – with the cotton being used to make the clothes we buy on the high-street. And tellingly, none of the UK’s major supermarkets are able to pass Oxfam benchmarks for fair practices in their supply chains.

Supply chains are long, complex and difficult to oversee – which means many companies may not be able to tell how many slaves are exploited under them. The Global Business Coalition Against Human Trafficking (GBCAT) are a list of companies doing their best to move towards slavery-free operations.

Companies that fail to mention problematic products automatically demonstrate a lack of transparency. Both Oxfam and the Business and Human Rights Resource Centre assess companies on their transparency and ability to keep human suffering out of their supply chains. They award companies a score out of 100% – with a higher score indicating better performance. Some of their findings are below.

What do we know about modern slavery in the UK?

In the UK, the Modern Slavery Act 2015 includes a clause titled ‘Transparency in Supply Chains’ that requires all large businesses to produce an annual statement outlining all the steps they’ve taken to prevent the use of modern slaves in their business and supply chains. In March 2020, the UK government became the first government in the world to release their own Modern Slavery Statement in accordance with this clause.

So, what are the typical ways modern slavery occurs in the UK? Some possible ways include:

How am I funding modern slavery?

With workers being exploited across all types of goods and services, it’s very likely that your money has helped fund modern slavery. In the UK, the common goods most likely to be created through modern slavery are clothing and accessories, laptops, computers and mobile phones, fish, cocoa and rice.

Modern slaves may have had a hand in producing what’s in your medicine cabinet, the jewellery you own, the electronics you use, the clothes you wear, and even in the sports you like to play. 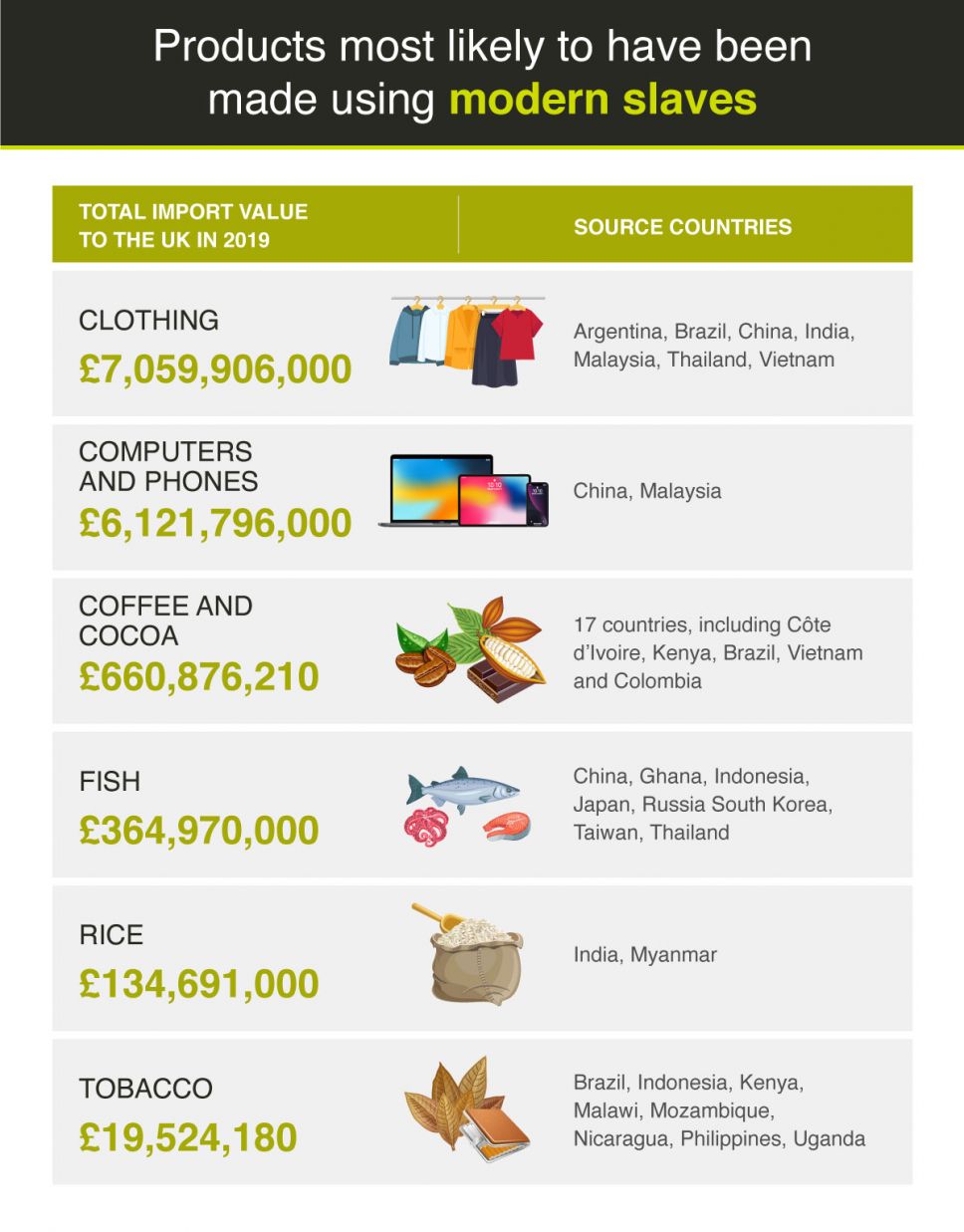 The best way to fight modern slavery with your purchasing decisions is to buy ethically-sourced or survivor-made goods. For example, by avoiding buying goods from countries that are reported to have used slaves in order to produce them, ensuring the companies you buy from have certifications that show commitment to fair working conditions (such as the FAIRTRADE® label), and buying products made by survivors of modern slavery. 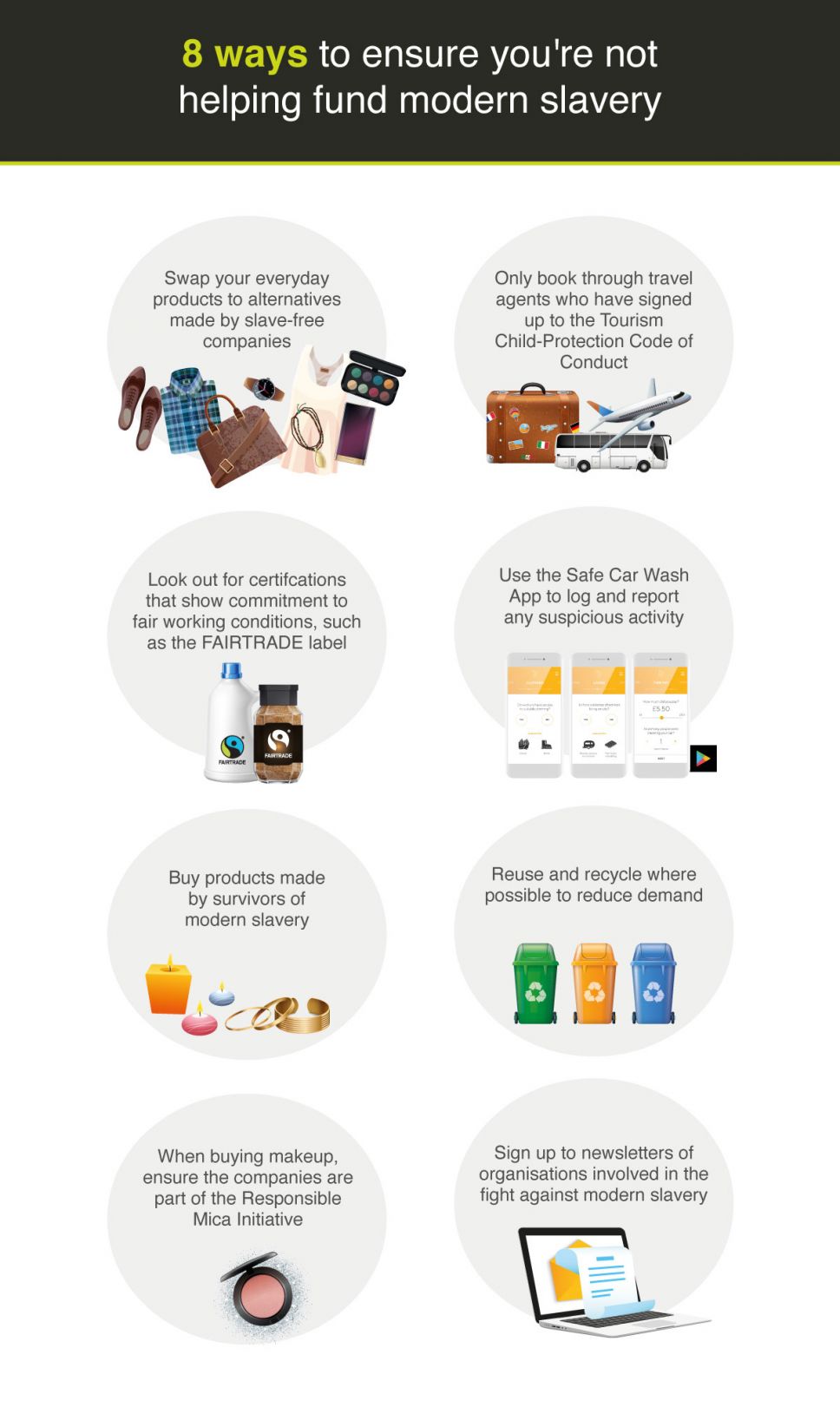 I want to help. What can I do if I suspect modern slavery?

In 2017, the Work and Pensions Committee published a report noting that there’s a lack of awareness and training in front line workers when it comes to spotting victims of modern slavery and helping them escape their situation. While there are dedicated organisations trained to help identify and support potential victims, the public can do their bit too.

The first step is to learn how to spot the signs of modern slavery. Some of the things you can look out for include: 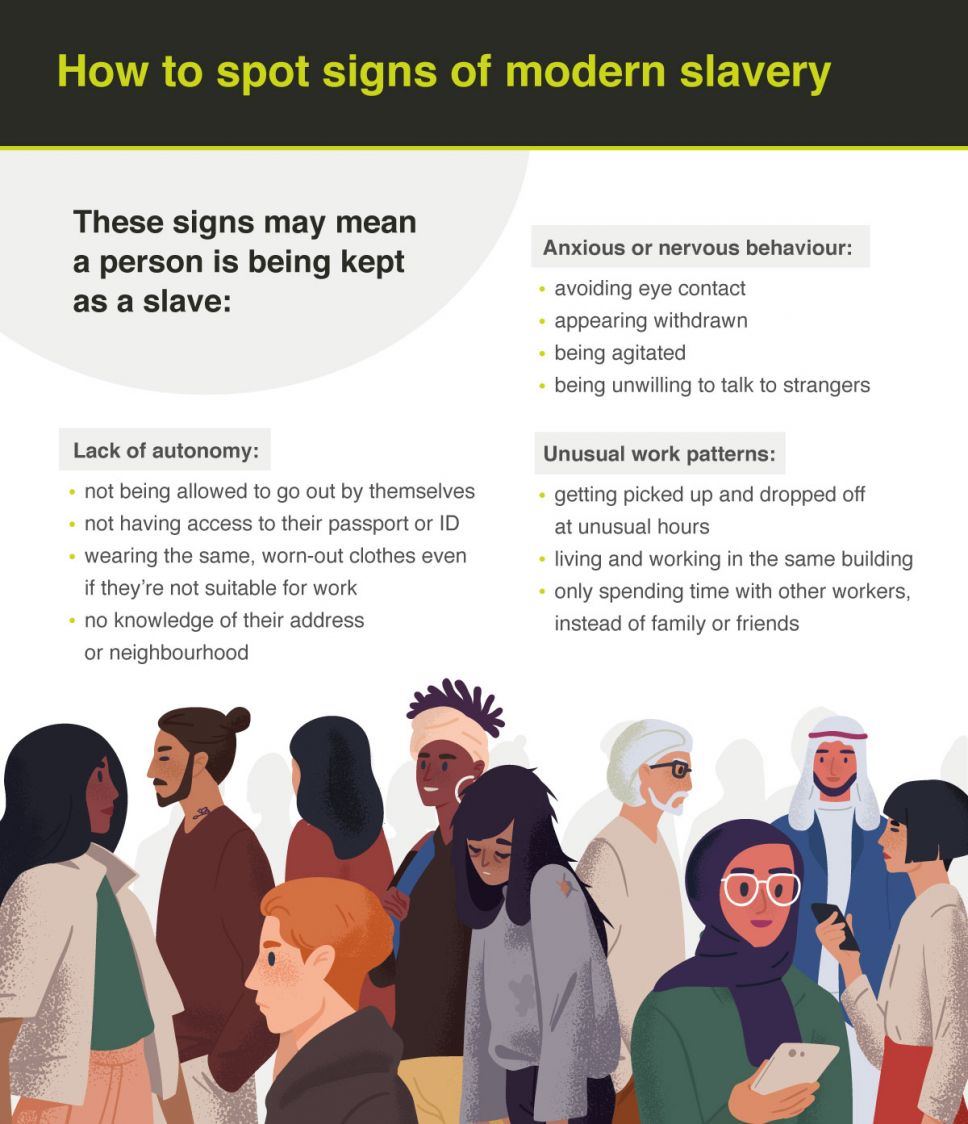 If you do suspect that someone might be in slavery, there are some options available to you. Remember, you should never confront the victim or the person exploiting them as you could be putting them in more danger. Instead, you can:

What are the conviction rates for modern slavery?

Unfortunately, conviction rates for modern slavery are still low. In March 2019, only 322 prosecutions were completed and only 219 convictions were served – at a time when 7,525 people were identified as victims.

Since January 2020, the government has been working on a ‘Modern Slavery (Victim Support) Bill 2019-2021’, that will give victims in England and Wales a guaranteed right to support while their case is being investigated. As of August 2020, the Bill still hasn’t passed to the second reading stage (that’s only stage two of a 12-stage process).

The government needs to take protection for survivors of slavery seriously, and ensure policies are in place to make it tougher for criminals looking to exploit vulnerable people. On an individual level, we can all help by making ourselves aware of the issues surrounding modern slavery, and actively supporting the organisations that are taking a stand against it.

If you or someone you know has been a victim of modern slavery, you can also pursue a compensation claim against the person, people or organisation(s) responsible. Contact one of our abuse solicitors to have a no-obligation, informal chat about your concerns today.