Poor knowledge of cancers could be leading to dangerous medical consequences

Very few of us will be fortunate enough not to encounter cancer at some point in our lives. Whether it’s a cancer scare or a cancer diagnosis – and whether it’s us or a loved one going through it – dealing with the reality of cancer can be one of the most distressing medical experiences we’ll have.

Cancer is an important social issue. But how much is society prepared for it? Bolt Burdon Kemp ran a survey of over 2,000 respondents in the UK to find out how much they know about the most common cancers. After all, diagnosis of cancer is entirely dependent on the patient being aware of the signs and symptoms of cancer and taking the appropriate action before it’s too late. Our findings reveal more work needs to be done to ensure the public is equipped with the knowledge to do so: 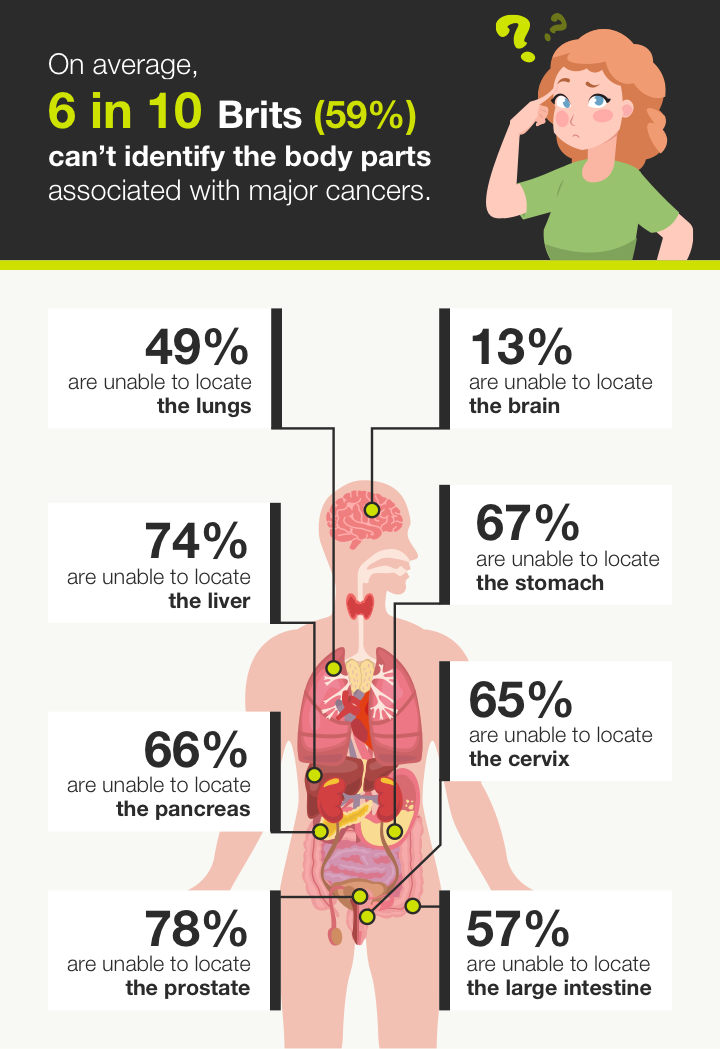 The most common cancers in the UK include lung, brain, prostate, cervical, breast, stomach, liver, pancreatic and bowel cancers. But, when quizzed on the body parts affected by these cancers, the British public were unable to accurately locate them on an image of the human body.

On average, six in ten Brits (59%) couldn’t identify the body parts, with almost eight in ten (78%) unable to locate the prostate and over seven in ten (74%) unable to locate the liver. Over six in ten Brits couldn’t identify the stomach (67%), the pancreas (66%), the cervix (65%) or the large intestine (57%), while half were unable to locate the lungs (49%). Even more worryingly, this lack of knowledge could result in dangerous consequences. According to the Less Survivable Cancers Taskforce[3] there are six specific cancers that are responsible for half of all deaths from cancer in the UK: lung, pancreatic, liver, brain, oesophageal and stomach. They explain that there is a ‘deadly cancer gap’ wherein someone who has been diagnosed with any of these six cancers only has a 14% chance of surviving at least five years after diagnosis.

It’s a serious cause for concern that there seems to be an equally pervasive ‘knowledge gap’ in Britain relating to the location of many of these parts of the anatomy. 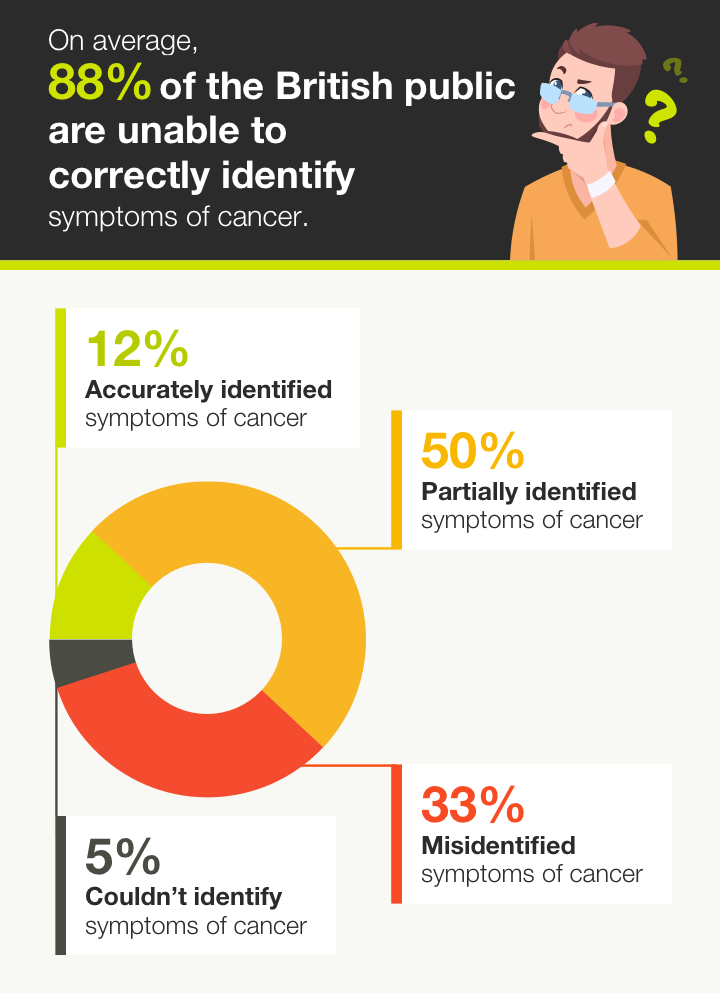 In a multiple-choice, ‘tick any that apply’ question, we asked the British public to identify some common signs and symptoms of cancer. The possible answers included seven common symptoms as well as three options that aren’t typically a sign of cancer. Only 12% of Brits were able to correctly identify all seven of the common symptoms without picking an incorrect one:

The British public are woefully uninformed of Britain’s deadliest cancers 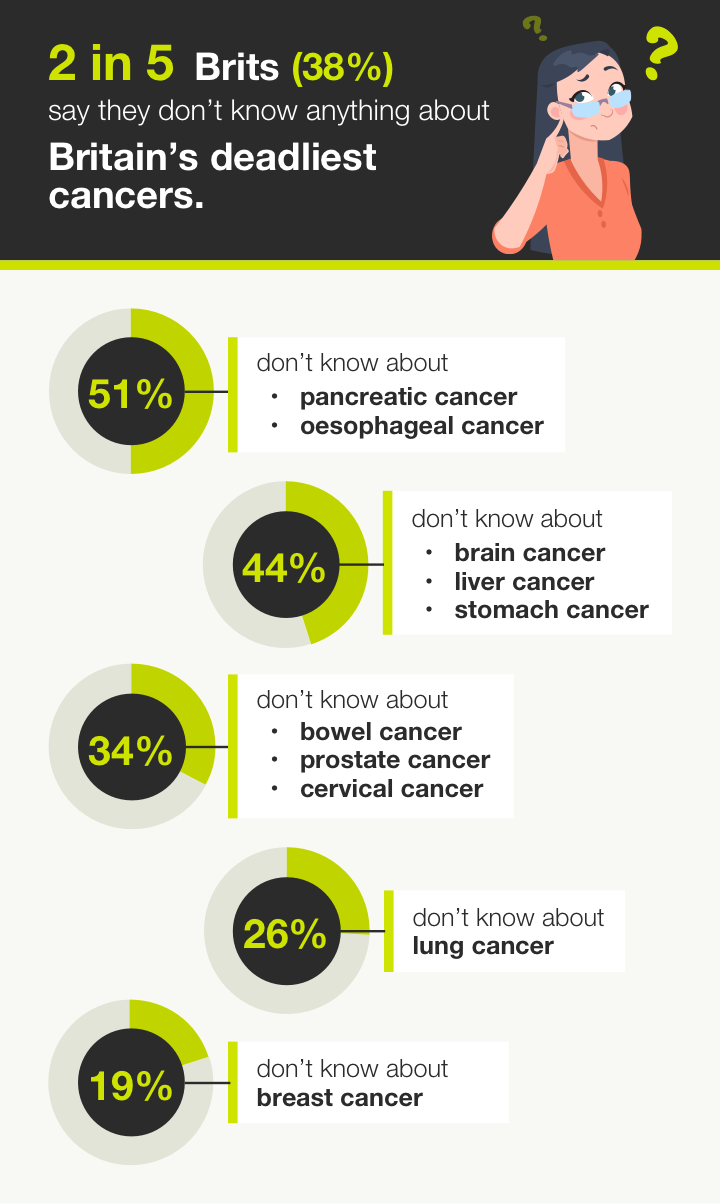 Considering 88% of the British public were unable to correctly identify common symptoms of cancer, it’s clear more needs to be done to educate the public. When asked to self-evaluate their knowledge of the cancers that kill the greatest number of Brits every year, the British public overwhelmingly said they lack lack sufficient knowledge.

On average, only 14% of Brits could say that they either ‘know a lot about’ or are ‘an expert on’ the following cancers:

In fact, half of Brits (50%) say they either ‘don’t know anything’ about pancreatic cancer and oesophageal cancer, while just under half (45%) say the same about brain cancer, liver cancer and stomach cancer. Fortunately, a smaller percentage of Britain say they lack knowledge And, only a third say they don’t know about digestive and reproductive cancers such as bowel cancer (33%), prostate cancer (33%) and cervical cancer (35%). Equally encouragingly, only one in five Brits (19%) say they lack knowledge about breast cancer.

A third of Brits aren’t confident about their cancer knowledge 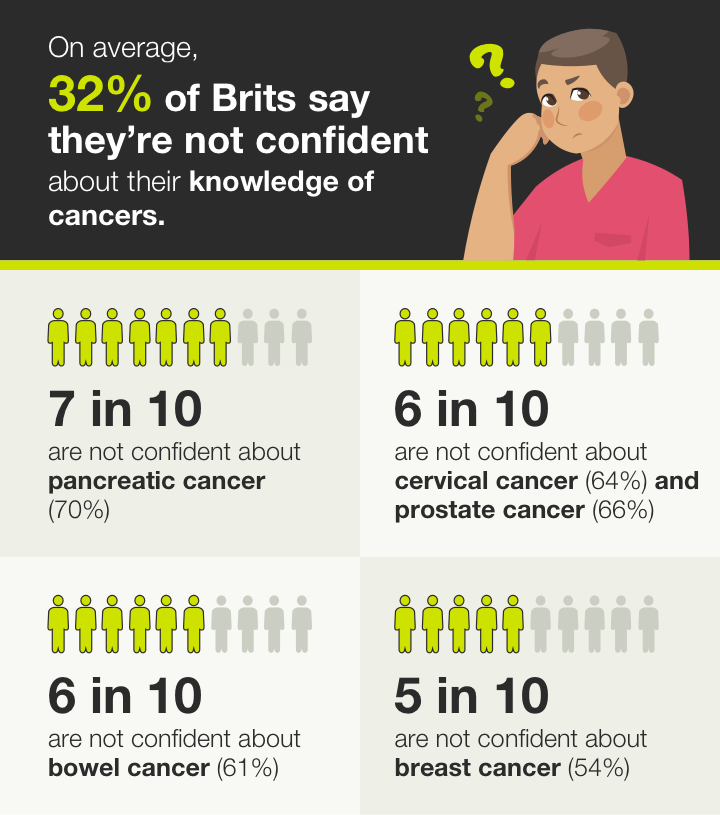 What’s more, a general trend shows that people from lower income households are more likely to say they lack knowledge of the most common cancers and that they aren’t confident about what they do know. For example:

All this aside, what is common knowledge, generally speaking, is that the earlier cancer is caught, the easier it will be to treat and the better the survival rate for the patient. It falls upon the government, the NHS, our GPs, cancer awareness charities and other concerned parties to make a coordinated effort to ensure the public is empowered to seek help as early as possible.

This effort should also be seen at an individual level too. From learning basic anatomy and deepening our understanding of common symptoms to solidifying our knowledge of common cancers, it’s important to take the necessary steps to help protect ourselves and our loved ones from cancer to the best of our ability. The NHS website, Cancer Research UK and Macmillan Cancer Support are all reliable sources of useful information and support.

The research was conducted by Censuswide, with 2,003 respondents aged 16+ in the UK between 7 April 2020 and 8 April 2020. The survey was conducted from a nationally representative sample of UK adults. Quotas were applied to nationally representative proportions for age, gender and region. Censuswide abide by and employ members of the Market Research Society which is based on the ESOMAR principles. Any reference to ‘Brits’ or ‘the British public’ within this piece refers to the full set of respondents surveyed.