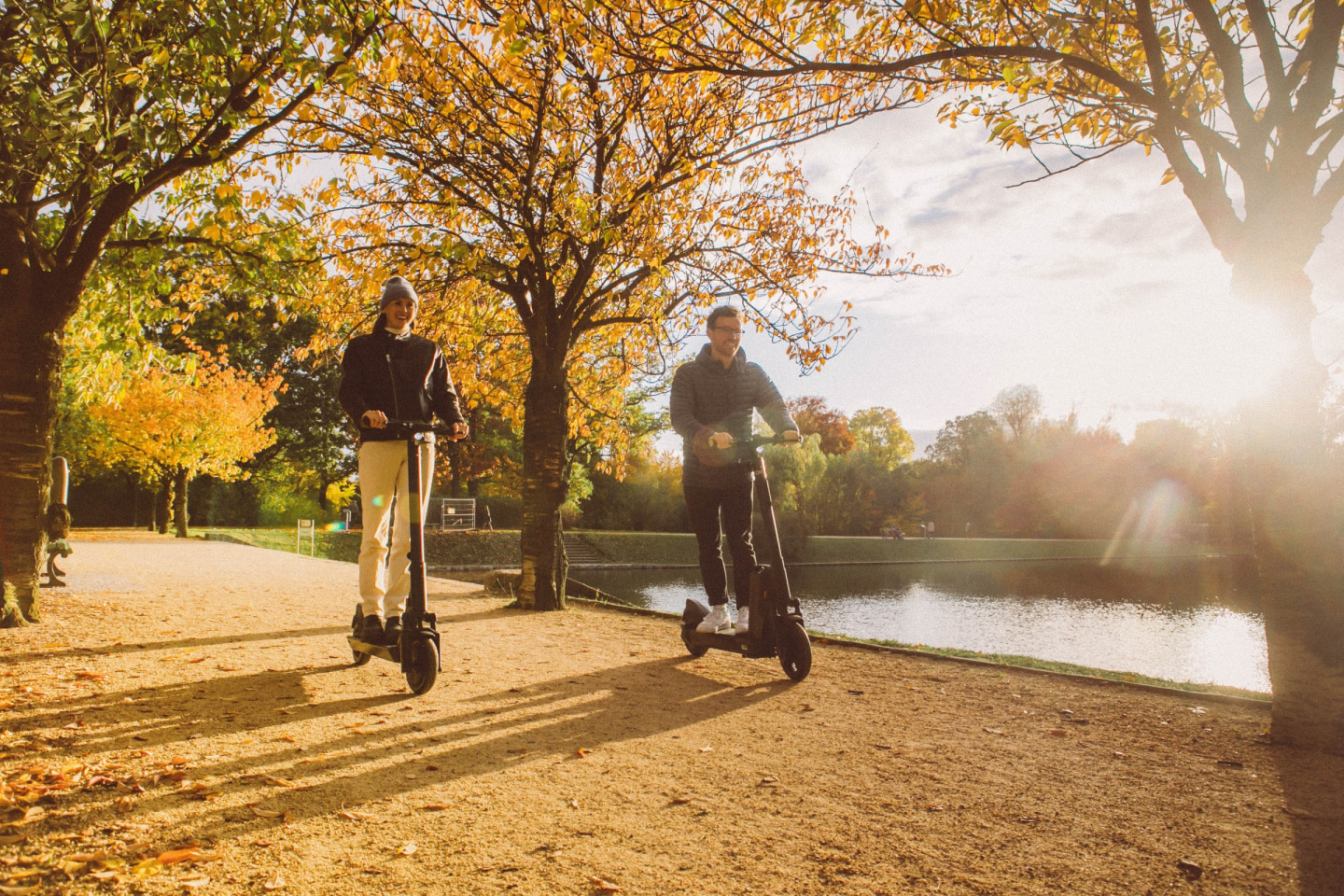 A Contemporary Danger On Trial

Electric scooters, commonly known as e-scooters, have become a common sight in many towns and cities.  Riding them is a rapidly growing trend and carries numerous benefits.

Though far from universally admired, they are portable, quiet and environmentally friendly, using only a small amount of electricity and releasing no emissions.  Together with wider transport policies, the emergence of micro-mobility devices – or personal light electronic vehicles (PLEVs) – promises to tackle urban congestion and air pollution.

But with the explosion of micro-mobility, our urban environments, regulators and insurers have struggled to keep pace and develop in line with existing traffic laws, public safety and liability issues.  This means that there are only limited circumstances where e-scooters can be ridden lawfully in the UK.

While it is legal to buy and own e-scooters, it is currently illegal to ride privately owned e-scooters on public roads and pavements.  They are only permitted to be ridden on private land, with the agreement of the landowner.  Many riders are unaware of this; or perhaps more likely, they continue using their e-scooters in public places regardless.  The use of e-scooters in public is illegal because they are classified as PLEV’s and treated as motor vehicles.  They are therefore subject to the same requirements as all other motor vehicles such as tax, MOT, licencing, lights, number plates and signalling capabilities as prescribed by the Road Traffic Act 1988.  E-scooters do not meet these requirements.  The same is also true of electronic skateboards and hoverboards.  Anyone caught using an e-scooter in a public place could face a £300 fine and receive six points on their licence (if they have one).  Their e-scooter may also be confiscated.  By contrast, electric bicycles can be ridden on roads and cycle paths so long as they meet certain requirements.  For example, electric bikes must have pedals to propel them; the power of the electric motor must not exceed 205 watts; and it must not assist beyond a speed of 15½ mph.  Any electric bike that exceeds those limits would also be classed as a motor vehicle.

From 4 July 2020, pursuant to the Electric Scooter Trials and Traffic Signs (Coronavirus) Regulations and General Directions 2020, rental e-scooters were legalised as part of trials to be held in around 50 cities in the UK.

In short, the regulations allow e-scooters to be hired and used on roads or cycle lanes within specific geographical areas.  It is noteworthy that it remains unlawful to ride them on pavements and this is unlikely to change.  Similarly, the prohibition against the use of privately owned e-scooters is unchanged.

As part of the trial, riders are not required to take out their own insurance.  Rather, it is the responsibility of the rental operator to ensure that a motor vehicle policy is in place, with a minimum of third-party cover.  Riders must hold a full or provisional car, motorcycle or moped license and they must be at least 16 years old.  Helmets are not mandatory and rental e-scooters are limited to a speed of 15½ mph.

While these measures seem largely workable, if e-scooter use is to be encouraged and adopted as a viable alternative to traditional modes of transport in the longer term, it appears unlikely the requirement of a driving licence can continue beyond the trial period.

The trials are expected to last for a year and will be closely monitored by government to assess their benefits and their impact on public spaces. The government’s intention is eventually to regulate e-scooters in the same way as electric bikes, but for now they remain classed as motor vehicles.

There is concern that the e-scooter rental trials will encourage more people to purchase their own e-scooters and ride them illegally.  In turn, this could lead to more road users who do not have third-party insurance in place.  When accidents occur in these circumstances, this can be hugely problematic for claimants and defendants alike – as was evident in the much-publicised ‘cyclist versus pedestrian’ case of Brushett v Hazledean (2019).

Ultimately, even if insurance is not made mandatory for riders of e-scooters in the longer term, prudent riders may elect to obtain a policy of insurance to protect them from costly potential injury and property claims.

There are also features of e-scooters that arguably make them dangerous.  Even before the rental trials commenced, e-scooters were involved in accidents that resulted in life-altering injury and death.  For instance, television presenter Emily Hartridge was sadly killed in London in 2019 after being hit by a lorry while riding an e-scooter.  While most e-scooters have an average speed of 20 mph, some can reach even higher speeds without any human effort.  They are also small and quiet, so difficult to see and hear coming.  Many have the tendency to view e-scooters as a toy rather than a vehicle with the potential to cause serious injury.  This can lead to unsafe behaviour and, inevitably, more accidents.  Another unsafe feature is the small size of the wheels and tyres: when encountering obstacles such as pavements or potholes, smaller wheels can lead to larger jolts for the rider, which can cause loss of control.

In these circumstances, the increased use of e-scooters could mean we begin to see more actions brought against local authorities for injuries caused to riders.  Other safety concerns include poor lighting, signalling and breaking capabilities and also the lack of helmet use, which early research associates with a higher incidence of head injuries.

Collisions involving e-scooters will inevitably occur, which will lead to injured people commencing personal injury claims.  If an owner of a private e-scooter injures someone, they could find themselves liable for criminal prosecution as well as a defendant in civil proceedings – regardless of the new legislation.  In the latter scenario, as many claimant practitioners will have encountered, questions arise as to whether there is a valid policy of insurance which will indemnify the defendant; and if not, whether they have the means to satisfy a judgment.

Within a trial setting, one can certainly envisage arguments arising whereby the operator’s insurer will seek to avoid paying out on the policy where the user has, perhaps, travelled outside of the defined area of permitted use; operated it in an illegal manner; or even modified the device potentially invalidating the policy.

Finally, without registration plates it may be difficult for the injured victim to locate the e-scooter rider, if details are not obtained at the time of the incident.  In the commotion of an accident, it may also be difficult to ascertain whether the e-scooter was part of a rental scheme or privately owned.

Aside from these more common e-scooter claims, it’s also likely we will begin to see claims brought by riders against other road users or pedestrians for their negligent actions.  Rental companies will undoubtedly require their own policies of insurance to protect themselves from claims for defective e-scooters.

The original article entitled ‘A Contemporary Danger on Trial’ by Joshua Hughes and Ben Pepper, first appeared in the August 2020 edition of Solicitors Journal.  It is republished here with their kind permission. 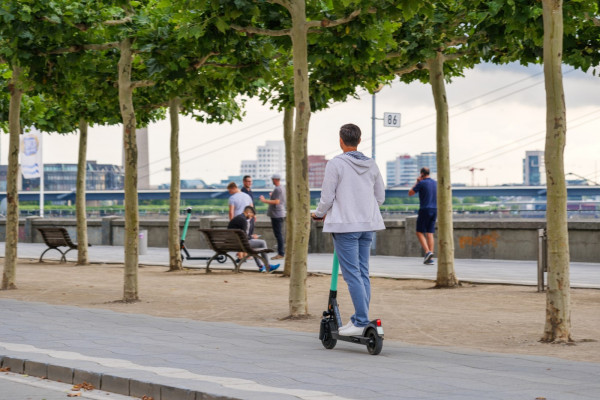 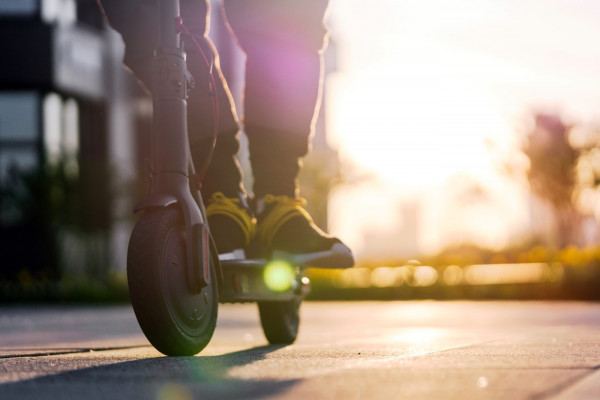 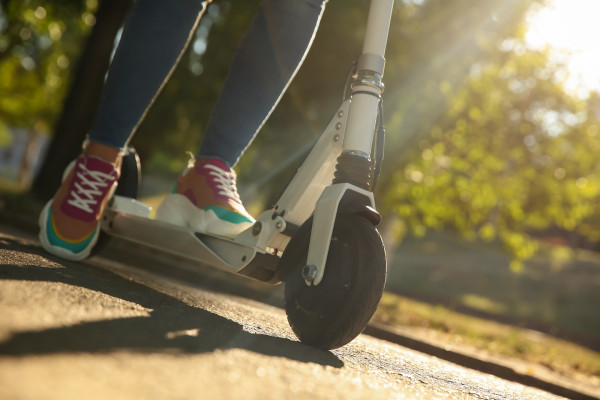